SageMathCloud (SMC) is the most powerful online $\LaTeX$ collaboration software available today. SMC offers the full complement of features expected from online services today for professionals and students, on a par with and exceeding other leading products, such as Overleaf and ShareLaTeX. In addition, SMC offers a complete environment for teaching, research, and exploratory computing with the same rich feature set.

Here’s an overview of key SMC features to back up the claims of the previous paragraph.

SMC has full simultaneous real-time collaboration with no explicit limit on the number of simultaneous users. Each user can customize the color of their cursor.

If your network connection temporarily fails, you can continue editing as long as you want, and your changes will be merged into the live document when you reconnect. In contrast, ShareLaTeX starts flipping out, locking the editor, fully refreshing the browser, etc. Overleaf also instantly locks editing.

If the user creates multiple cursors (like in Sublime Text) using command or alt click, all cursors are visible to other users. This is not the case with ShareLaTeX and with Overleaf. Overleaf doesn’t even show cursors of other users.

In addition, as with Google docs, SMC has a chat on the side of each document. Improving on Google docs, you can include mathematical formulas and markdown in the side chat which are beautifully rendered, and edit any past chat message. Other collaborators are notified of messages via a bell in the upper right, similar to Facebook. In comparison, Overleaf doesn’t have document chat; ShareLaTeX has it, but does not allow editing past chats or Markdown formatting. 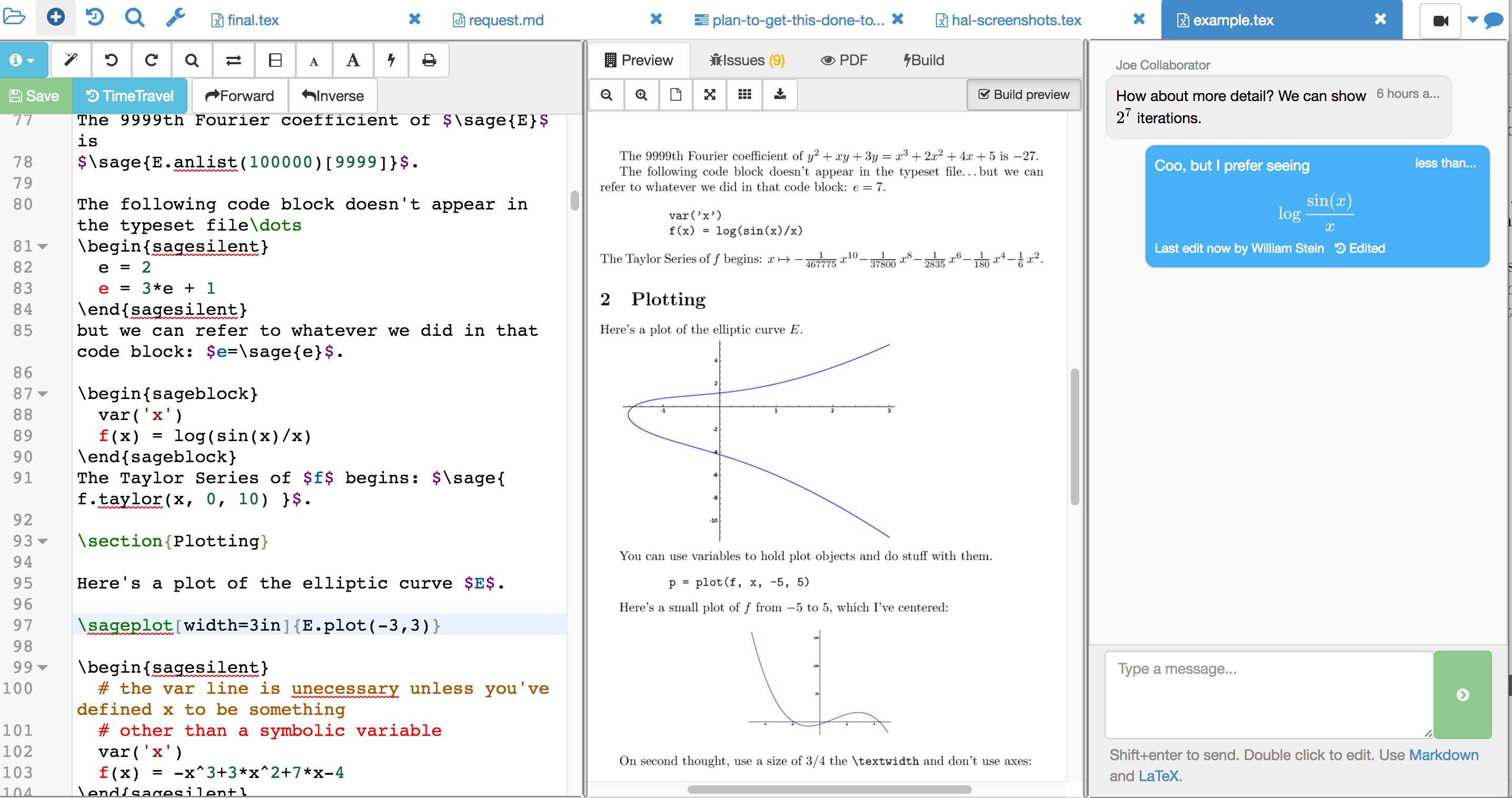 Every edit (at 2-second resolution) is recorded and stored forever in our backend database. You can browse the history using the TimeTravel view, which includes a diff mode that shows exactly what changed between two points in time (and who made those changes).

In addition, we store several hundred read-only snapshots of the complete filesystem state, which users can easily browse. This lets them recover older versions of files that might not have been edited via the graphical editor (e.g., vim or emacs via a terminal).

Accessing backups of a file. 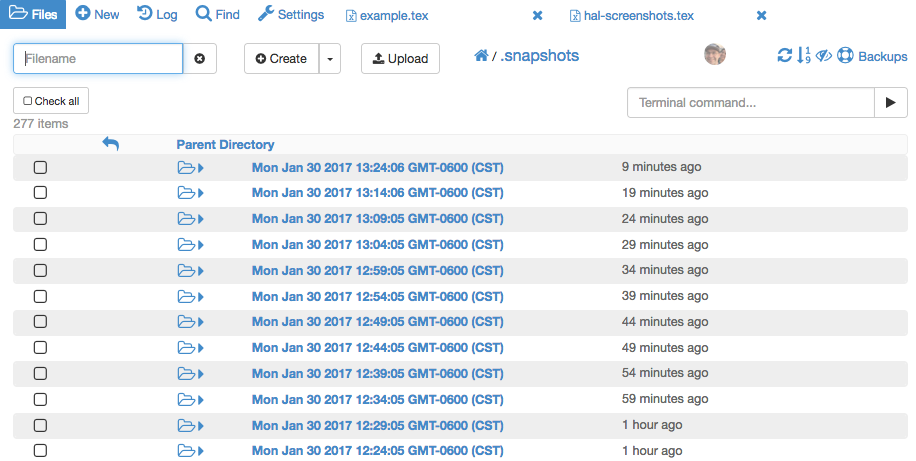 You can use Git, Subversion, RSync, etc. on the command line to explicitly track all files or synchronize with a remote server such as GitHub.

No Local Software Needed, Use Anywhere

Because SMC is a cloud service, there is no software to install locally, and projects are reachable from any device with an internet connection. Files can be exported online to .pdf and .docx format without the need for local installation of $\LaTeX$ software.

SMC fully supports processing even the most complicated imaginable $\LaTeX$ documents using custom build systems. We support several $\LaTeX$ engines – pdflatex, latexmk, and xelatex – with most packages preinstalled. Users can easily request additional packages (by clicking the help button), or install them themselves. The $\LaTeX$ build command is fully customizable, and can involve running arbitrary Linux programs, since we offer a full command line terminal environment. It is, for example, even possible to use GNU make to orchestrate the full compilation via a Makefile. This is overall far more powerful than the build options with Overleaf and ShareLatex. You can put anything you want in the command line in the image below:

Customizing build command to use XeLaTeX.

Our $\LaTeX$ editing environment comes with SageTeX pre-installed, which makes it easy to add the output of Python (and SageMath!) computations to any $\LaTeX$ document. No competitors offer running sophisticated mathematical software as part of the compilation process. This is very useful to people creating randomized homework, too.

Besides SageTeX, SMC supports embedding R code via knitr into $\LaTeX$ documents. This technique is very popular for generating documents with statistical and data science content. Overleaf and ShareLaTeX have only limited R support. 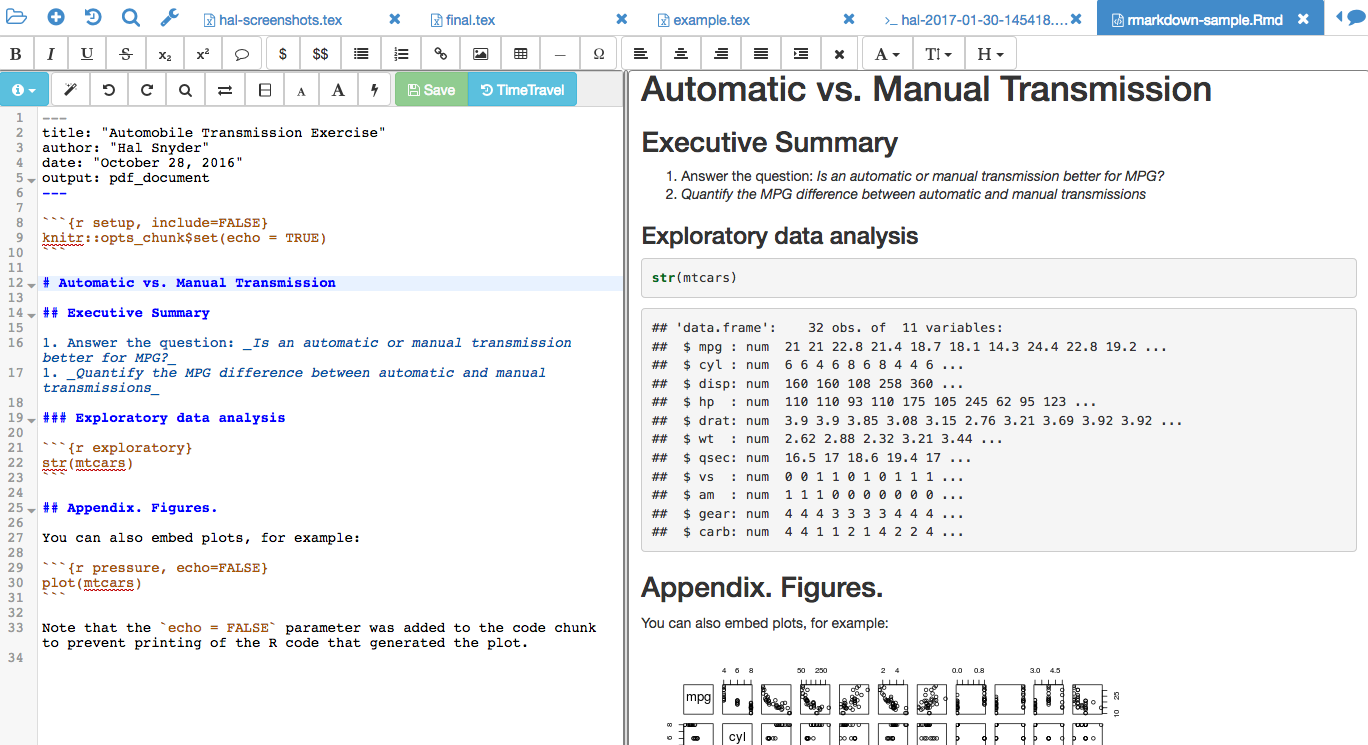 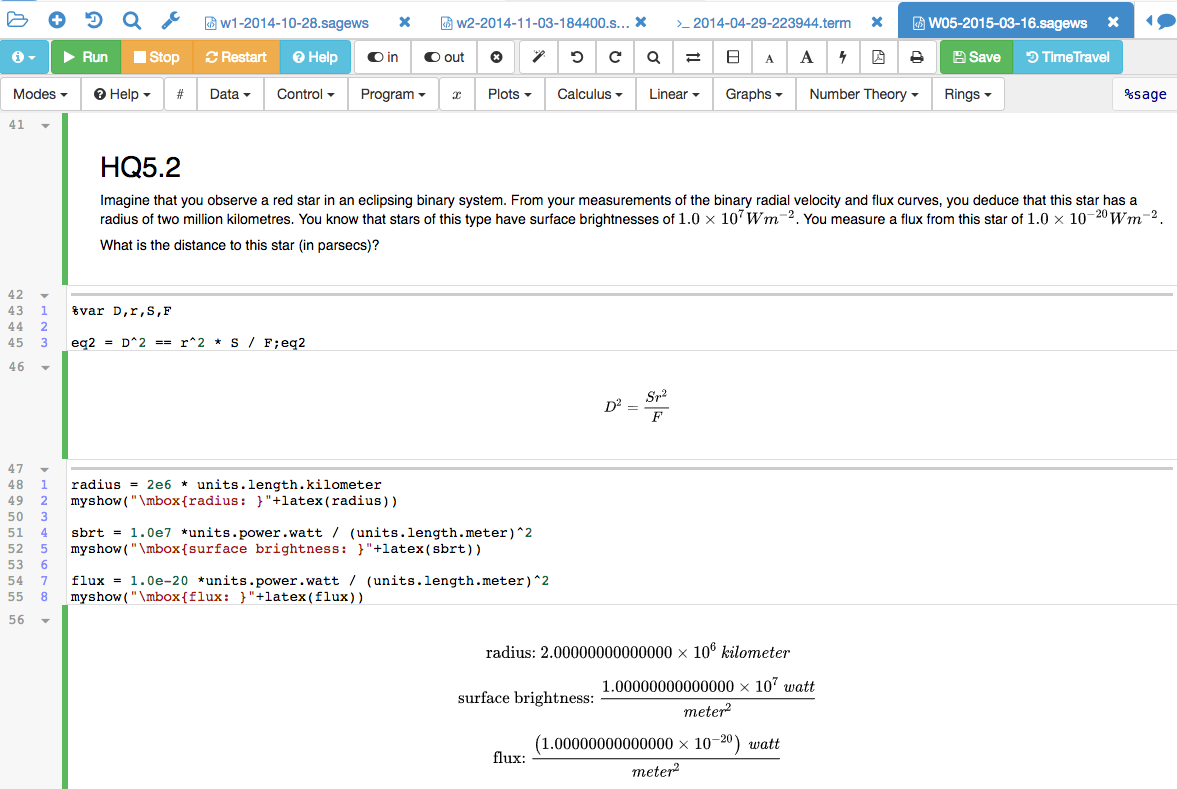 Sage worksheet with $\LaTeX$ in markdown and symbolic expressions, with units of measure. 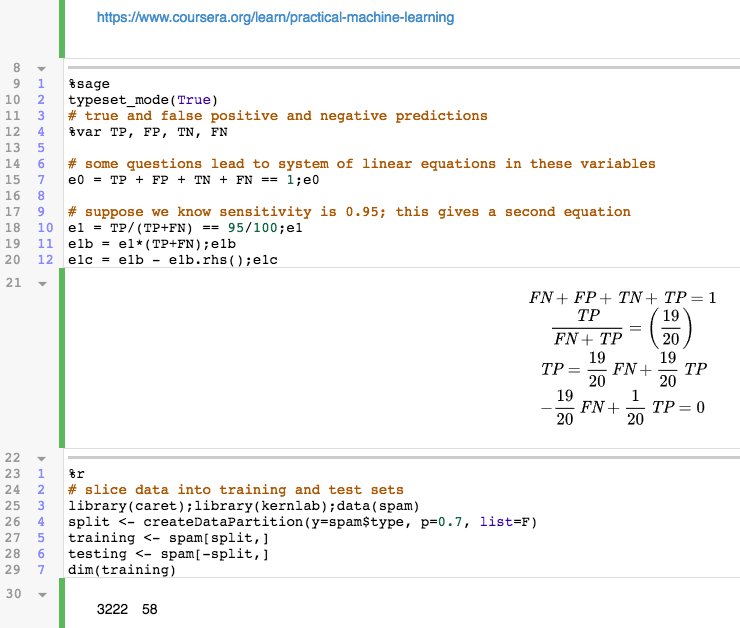 Sage worksheet with symbolic expression and calculation in R.

We provide a Docker image so that users who need an offline version of SMC in which to use $\LaTeX$ (e.g., on an flight) can easily do so.

SMC fully supports online preview, even for documents that are 150 or more pages. It progressively refines the resolution of the preview images and nearby pages. One of the SMC developers wrote the recent Cambridge University Press book “Prime Numbers and the Riemann Hypothesis” entirely using SMC. 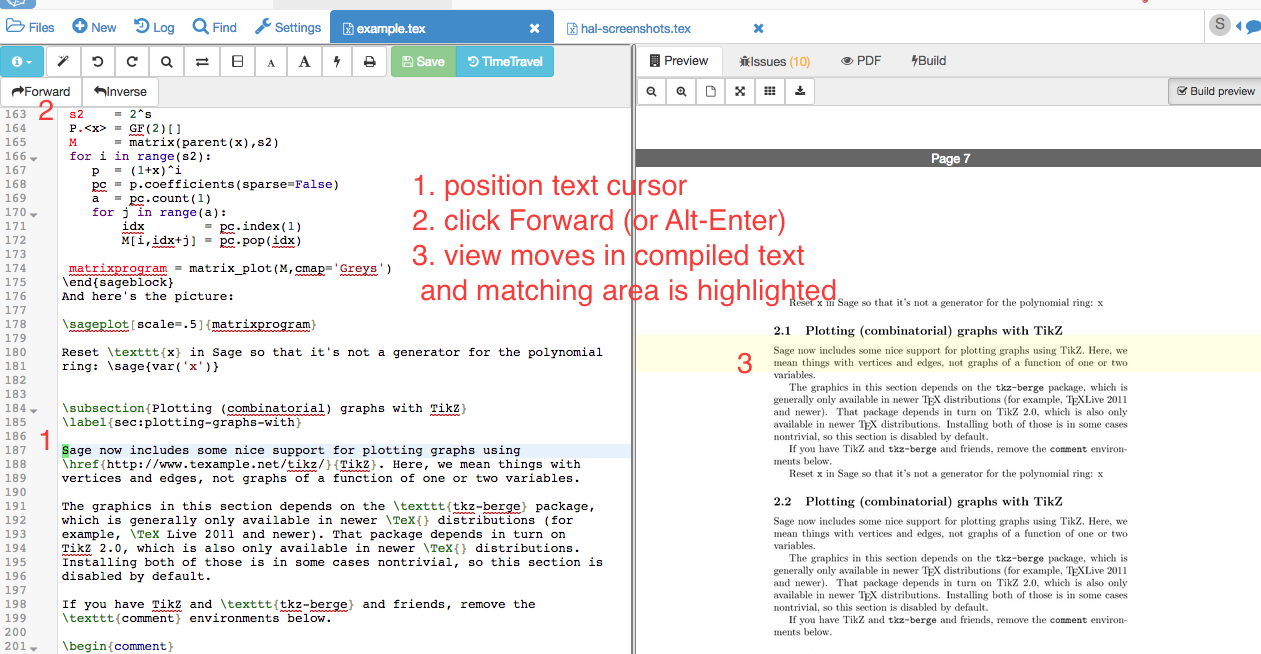 We have a full-featured text editor for $\LaTeX$ documents. Like a coding IDE, it has horizontal and vertical split view, which lets you look at two points in the $\LaTeX$ document simultaneously. Also, we wrote a code folding mode (see https://github.com/codemirror/CodeMirror/pull/4498), so one can easily toggle display of sections, subsections, etc. (Overleaf has no code folding, but ShareLaTeX does.) We support Emacs, Vim, and Sublime keybindings, and many color schemes.

We have a side-by-side Markdown (and HTML) editor with realtime preview, which fully supports $\LaTeX$ formulas. 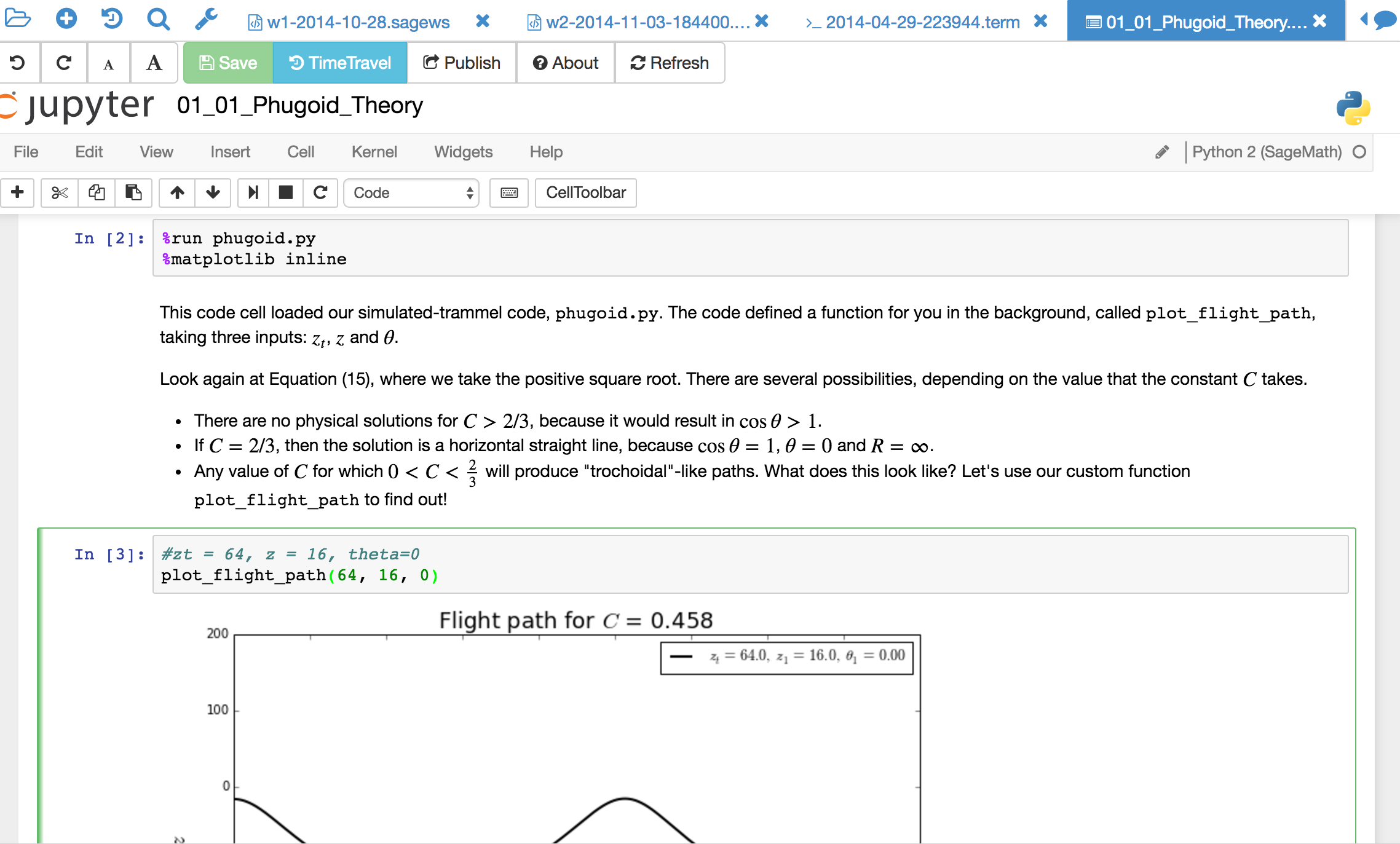 Newcomers to $\LaTeX$ find the overall SMC environment helpful for learning how to typeset formulas. E.g., they will see beautiful math output in Jupyter notebooks or Sage worksheets, then click to see what $\LaTeX$ code generated that output, and start using it in their documents. They learn a few features at a time and include them in their workflow.

SMC has a clean, modern real-time user interface with tens of thousands of passionate active users. We have been polishing the SMC user experience based on feedback since April 2013. SMC has users around the world who give our customer service high marks. 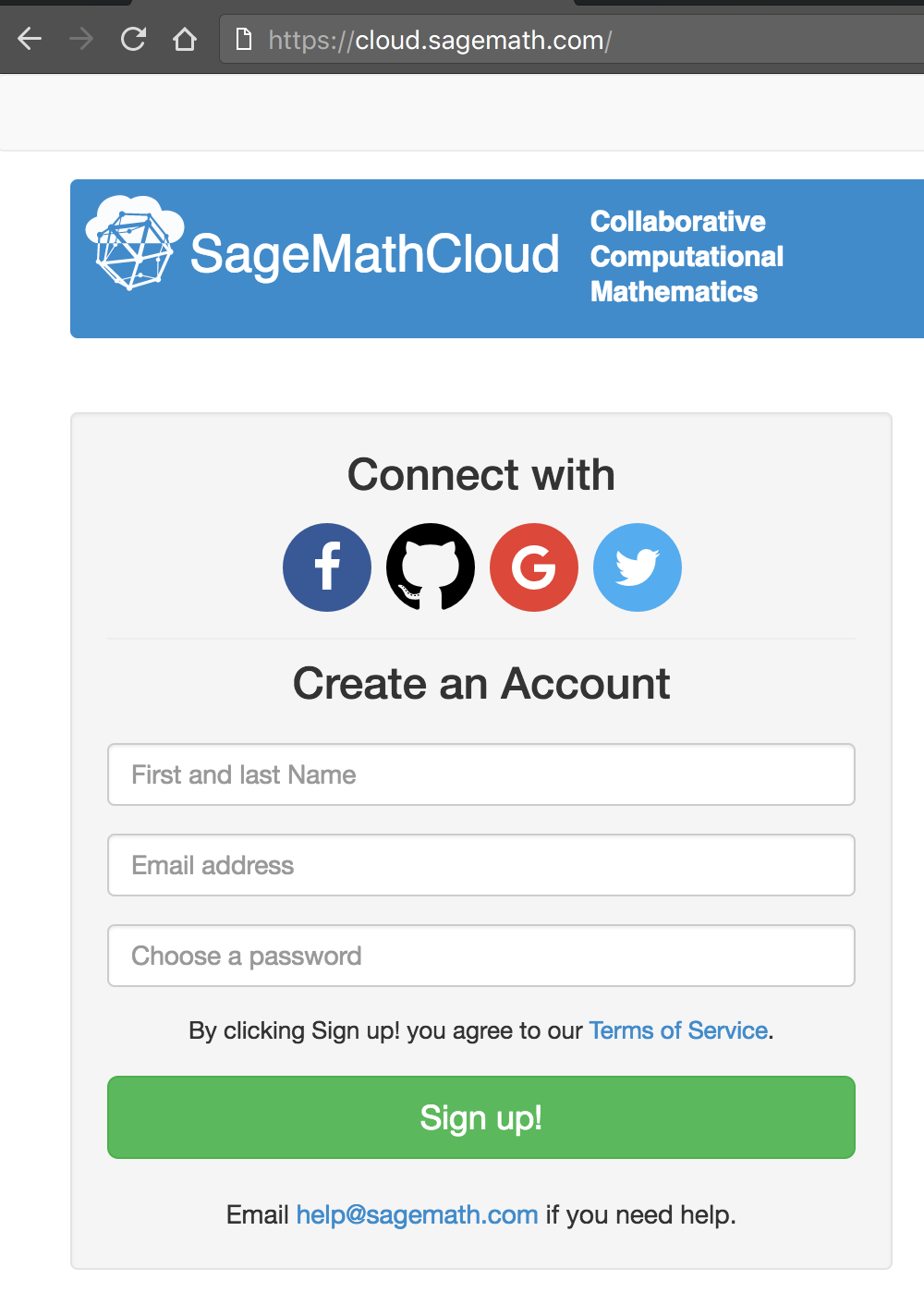 Signing up and logging in.

SMC has an integrated course management system, which makes it easy to fully use $\LaTeX$ with students in the context of teaching courses and workshops. For example, you can create a document template (with questions), push it to all students, let them work on it, then collect it later, grade it, and return it. For more information on this feature of SMC, see Mike Croucher’s guide to the course management system at https://mikecroucher.github.io/SMC_tutorial/.

As noted above, SMC gives you access to a full Linux environment, with dozens of programming languages and thousands of libraries and packages pre-installed. You are ready to go with computer algebra systems for theoretical mathematics, scientific packages for physical sciences and bioinformatics, and statistical and machine learning software for data science.

SMC allows for unlimited projects and collaborators, with 3GB of disk space per project, on free accounts. You can start using SMC for free right now by creating an account at https://cloud.sagemath.com.

Our pricing is by project and is listed here:

One could in theory, have thousands of $\LaTeX$ documents in the same project.

We charge for other upgrades, including extra disk space and more RAM. The two most important upgrades are “outside network access” and “members-only hosting”. Outside network access makes it possible to connect to the Internet from within a project in order to push and pull data to remote sites (e.g., GitHub). Projects are placed on two separate pools of computers: the free machines and the members-only paid computers. The computers are similar, but the free ones are rebooted frequently (usually once every 24 hours) and are more crowded; the members only machines are almost never rebooted.

The best quantity discount is the “Large course plans”; the price to provide members-only hosting and have outside network access for one project is about $10/year. This is cheaper than the published prices from our competitors.

Unlike Overleaf and ShareLatex, we do not remove any of the functionality of SMC when you use it for free. Having a free account only limits disk space, network access, and how quickly and robustly documents are compiled.

In conclusion, we invite people to use our very powerful $\LaTeX$ environment and see how useful it is. Not just for for creating documents, but also for computation, research and teaching.